In the Name of God, the most Beneficent, the most Merciful

Peace and blessings be upon His Chosen One, the Prophet Muhammad, and his pure and immaculate progeny. 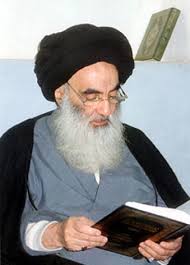 We* had the honor of visiting the Grand Marji’ Ayatullah al-Sayyid al-Sistani (May God keep his noble shade over us) on Thursday, 11th Dhil-Hijjah 1439. We requested him to give some fatherly advice to us and the preachers and lecturers speaking from the Husayni pulpit, considering the imminent arrival of the month of Muharram. He graced us with the following illuminating words of guidance, full of care, attention and ardor in shielding the religion, and protecting the status of the Husayni pulpit in delivering its most serious message. In giving his advice, he (may God keep his noble shade over us) presented two main points:

The first point was on the role of the Husayni pulpit, especially in the days of Muharram. He advised that the message of the pulpit can be summarized as being – besides the recitation of the tribulations of the holy Household – the propagation of religion and embedding it in the minds and hearts of the Muslims, through the delivery of the teachings of the Quran, and the alleviation of misconceptions and doubts using strong and convincing proofs, and the nurturing of the believers to the path of piety, virtue and exemplary values.

This is the very role that God Almighty ordained for His Messenger (s), who was the first to ascend onto the pulpit of Islam. The Quran expressed his role in saying, “He is the One who sent unto the inhabitants of Mecca a prophet from amongst themselves, who recites to them His revelations, and purifies them, and teaches them the Book and the Wisdom, although they were before in clear error.” (62:2) This noble verse indicates that the prophetic message – for which the pulpit was the means of delivering it – was focused on establishing the religion through the cleansing of the souls and their purification from the filth of darkness and spiritual and ethical illnesses, the presentation of Quranic teachings, and the instilling Wisdom in the hearts.

Similarly, the greatest purpose of the Correctional Movement that was led by the Master of Martyrs (a) was to protect the religion of Islam and to entrench it, in opposition to the Umayyad plans which were founded on destroying the central pillars and values of Islam as is evident from many proofs that can be ascertained by referring to the historical texts. Indeed, his revolution stood against that dangerous conspiracy, and his message and sacrifice was for the greatest of all purposes: the protection of religion from decline and distortion. I believe that were it not for the sacrifice of Imam Husayn (a) in such a great manner in such a sensitive time, there would be no remnant of Islam worthy of mention surviving today, as the Umayyad plan was thought-out and they were close to achieving their goal. As such, the Husayni pulpit is an extension of the fateful day of Imam Husayn, and its role and function focuses on religion – fortifying it, defending it, teaching it and nurturing through it.

The second point: The most vivid means by which one may protect religion and entrench it in the present age is through alleviating misconceptions and doubts which are spread in opposition to the religion of Islam and its original teachings and ethical values. However, it is important to note a number of issues:

We pray to Almighty God to provide His divine support to all the speakers in undertaking their role in the best possible manner, and to discharge their duties in fortifying the religion and purifying the hearts of the Muslims, for He is the All-Hearing and the Respondent to supplication. 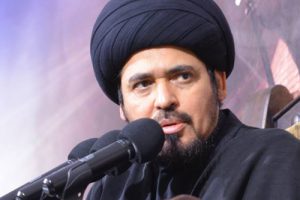 His Eminence Sayyid Munir Al-Khabbaz is a scholar of advanced studies in the Islamic Seminary, and a student of the Grand Ayatullah Sayyid Ali Al-Sistani and other prominent scholars of the Islamic Seminaries in The Holy City of Najaf and Qum.  Upon his visit to the Grand Aytullah Al-Sistani last month, he was given the following message to be delivered to the speakers and lecturers of the Husayni pulpit.

You can find out more about which cookies we are using or switch them off in settings.

This website uses cookies so that we can provide you with the best user experience possible. Cookie information is stored in your browser and performs functions such as recognizing you when you return to our website and helping our team to understand which sections of the website you find most interesting and useful.

You can adjust all of your cookie settings by navigating the tabs on the left hand side.

Strictly Necessary Cookie should be enabled at all times so that we can save your preferences for cookie settings.

If you disable this cookie, we will not be able to save your preferences. This means that every time you visit this website you will need to enable or disable cookies again.